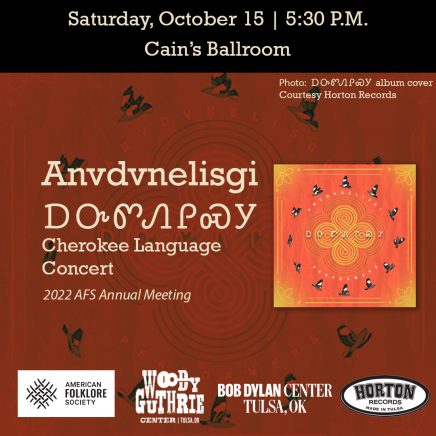 Free and open to the public.

Anvdvnelisgi ᎠᏅᏛᏁᎵᏍᎩ is a groundbreaking album of original contemporary music from Cherokee musicians sung in the Cherokee language. Led by Cherokee citizens as part of a wide-ranging commitment to preserve and expand the Cherokee language, the newly released Anvdvnelisgi ᎠᏅᏛᏁᎵᏍᎩ album is produced by Cherokee filmmaker and creator Jeremy Charles and distributed by Horton Records, a nonprofit label that provides support and tools for Tulsa-area musicians to broaden their reach. The album was funded in part through the Commemoration Fund, dedicated to supporting bold and innovative efforts to correct social, political and economic injustices that impact Black, Indigenous, Latinx and People of Color.

To honor and celebrate the work of Cherokee musicians, American Song Archives, Horton Records and American Folklore Society are thrilled to host a free concert on Saturday, October 15, 2022 from 5:30-7:30 p.m. at Cain’s Ballroom featuring many of the artists featured on the album.

IIA (Lillian Charles), pop – Lillian Charles is a 14-year-old Cherokee citizen from Tulsa, Oklahoma. She writes songs, short stories and screenplays and is also a prolific artist. She is a winner of the Gateway Entertainment Youth Scriptwriting Competition, and Tulsa Library Youth Writing contest winner.

Austin Markham, pop/R&B – Austin Markham is a Nashville-based, 22-year-old pop/R&B singer-songwriter set to catch your attention with vulnerable lyricism accompanied by buttery vocals. He works endlessly to perfect the music he puts out, and pushes himself to be a role model of confidence, self-love, and perseverance to listeners of all backgrounds. With a strong passion for his heritage and the experiences that have shaped him into the artist he is today, Austin is excited to share his unique roots with the world. Although his music falls under the pop/R&B umbrella, Markham effortlessly blurs the lines between genres, creating an environment for various discussions and feelings.

Desi & Cody, rock – The Tulsa, OK-based duo, Desi and Cody are united both through music and matrimony. Desi’s seductive voice combined with Cody’s emotive vocals and sweet harmonies, sonically manifest a refreshing homage to classic 60’s femme fatales with chamber pop and baroque textures which transform their Okie roots into the realm of futuristic folk.
A native Oklahoman, and part Cherokee, Cody grew up in the backwoods while Desi grew up in the Northwest (Vancouver, WA and Portland, OR). She rediscovered her singing after connecting with Cody—who first heard her talent emanating from the shower.
Desi and Cody’s music possesses an inherent irreverence reminiscent of Lynch or Tarantino movies. Songwriting for Cody is a visual expression, “Film usually inspires me most,” he states.“ “No Depression” called their self-titled album “superb” while The Tulsa Voice” lauded: “there’s no higher praise an album could receive.”

Kalyn Fay, folk/Americana – Oklahoma-bred songwriter Kalyn Fay has a voice that commands rapt attention, whether filling a theater or piercing the din of a dive bar. It’s a tenor timbre a first-time listener once aptly described as “butterscotch,” all rich and velveteen, bold, singular.
Fay’s been writing and recording her own music for as long as she’s had a story to tell. She’s lived more than her share of life: She’s loved and lost, voraciously pursued higher education, questioned her faith, walked the line between her upbringing and her Cherokee roots, and figured out how to process and express all that through her art. She’s traveled. She’s come back home. She’s left again.

Aaron Hale, psychedelic/singer-songwriter – Aaron Hale is a classically trained (Oklahoma State University), multi-instrumentalist, singer/songwriter, and an enrolled member of the Cherokee Nation. Upon the release of his debut album “Wildflowers & Atom Bombs” in 2017, Hale began performing with and without his band (Aaron Hale & The Human Beings) at music festivals nationwide taking with him a strong message of environmental stewardship, Native American Sovereignty, and global unity. Currently Hale is recording his sophomore album, “Stardust & Campfires.” The album features McKenzie Webb on drums, and Patricio Labarca (Medicine for the People) on bass with Hale playing guitar and keys. The album also features a collaboration with Supaman, Peewee Dreads (Wookiefoot) and Sierra Marin contributing vocals, and Tim Snyder (Medicine for the People/Wolfgang Timber) on violin. Hale is also featured as a keyboardist in Chase Makai’s (Medicine for the People) debut album “Undique.” Trent Bell (Chainsaw Kittens) produces and records Hale’s albums at Bell Labs Recording in Norman, Oklahoma.

Ken Pomeroy, alternative folk – Ken is a singer/songwriter, transcending her age with a unique vocal quality that blends smoothly with her heartfelt lyrics. Ken began singing, writing songs, and playing the Baritone ukulele at age 9. She quickly learned to play the Concert and Soprano Ukulele, and at age 10 began playing guitar. In 2018, Ken opened for the legendary Wanda Jackson at the Oklahoma Rodeo Centennial Opry. Just recently in 2018, Ken won the 1st Annual Jimmy LaFave Songwriting Contest in Stillwater, Oklahoma at Willie’s Saloon. She shared the stage with Stoney LaRue and Bo Phillips at the Bob Childers Gypsy Cafe Event benefiting the Red Dirt Relief Fund in Stillwater, Oklahoma. She is a regular at the Woody Guthrie Folk Festival playing Lou’s Rocky Road Tavern stage and The Hen House. You can regularly catch Ken playing numerous venues around Oklahoma City and Norman, including JJ’s Alley in downtown OKC.
She has played the Grand Stage at the Riverwind Casino and is a regular at the Oklahoma Rodeo Opry. She also played the first Mile 0 Fest music festival in Key West. She was featured on The Oklahoma Room 2018 compilation CD and attended Folk Alliance International. In 2016, Ken received the Rising Star award. Ken released her debut EP “Minutes to Hours” in 2017 and has just completed her 2nd album “HALLWAYS.”

Colby Luper, metal – Born in the Cherokee Nation capital of Tahlequah, OK, Colby Luper fell in love with music at a young age. Hard rock and heavy metal made the biggest impression on him when he first heard bands like AC/DC and Black Sabbath on classic rock radio. He’s been a metalhead ever since. Picking up his first guitar at age 12, he began learning every Metallica, Iron Maiden, and Judas Priest riff he could manage. He began writing his own music in high school and started jamming with friends around the Tahlequah area. His musical influences include the aforementioned artists as well as Nirvana, Weezer, Black Flag, and Slayer. He’s currently a guitarist and vocalist in the alternative rock band “Still Loading” and uses his solo material as an outlet for his love of metal. He resides in Tulsa with his wife, Erica.